This event has already taken place! Please make sure you are in the correct year. ×
Jan
23
Wednesday
Jan
23
Wed 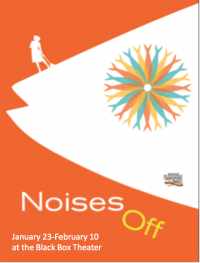 Montana Shakespeare in the Parks presents Michael Frayn's backstage comedy, Noises Off. Described as 'breathlessly clever", "splendid, delirious fun", and "the greatest farce ever written", this play within a play is sure to delight Gallatin Valley audiences. Directed by Kevin Asselin (Death of a Salesman, A Little Night Music, My Fair Lady) and performed by a cast of Shakespeare in the Parks veterans, in Noises Off, everything that can go wrong...does. This preview celebration will include heavy hors d'oeuvres, drinks, and feature live entertainment. Tickets $75.
Get Tickets
Advertisement
Links: https://www.shakespeare.....man-preview-celebration