This event has already taken place! Please make sure you are in the correct year. ×
Feb
16
Sunday
Feb
16
Sun 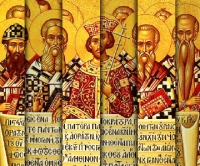 Between 284 and 337 eight emperors had ruled the Roman empire. By the end of this short span of tumultuous history, Constantine had risen to the role of sole emperor, and at his death, the Empire was essentially Christian. “The Fractious 4th Century” explores the difficult transition of the church from being a religious cult on the margins to the lone religion of the empire. It covers the period of time roughly between 280-380 AD, examining such issues as how the Scriptures were canonized, the evaluation of heresy and orthodoxy, and whether the Roman Empire was “Christianized” or Christianity was “Romanized.” Register today for this free 3-evening class February 16-18, from 6:30-8:30pm at YTI.
Register Now
Advertisement
Links: https://ythi.org