This event has already taken place! Please make sure you are in the correct year. ×
Mar
26
Thursday
Mar
26
Thu 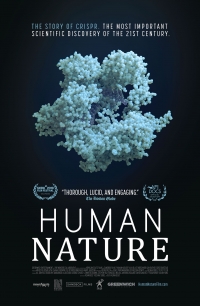 On Thursday, March 26th, at 7pm at the Emerson Center, The Bozeman Doc Series presents the Montana premiere of the critically acclaimed new documentary Human Nature.

From executive producer Dan Rather and director Adam Bolt, the co-writer and editor of the Oscar-winning film Inside Job, comes the story of the biggest tech revolution of the 21st Century. And it isn’t digital, it’s biological.

A breakthrough called CRISPR has given us unprecedented control over the basic building blocks of life. It opens the door to curing diseases, reshaping the biosphere, and designing our own children. Human Nature is a provocative exploration of CRISPR’s far-reaching implications, through the eyes of the scientists who discovered it, the families it’s affecting, and the bioengineers who are testing its limits. How will this new power change our relationship with nature? What will it mean for human evolution? To begin to answer these questions we must look back billions of years and peer into an uncertain future.

“Fascinating…an engrossing treatment of a revolutionary breakthrough in biochemistry. Beyond what we can now do to change our genetic code, CRISPR presages a world where we can tweak not just our own DNA, but that of other species and genera, perhaps fortifying plants and animals against the dangers of climate change. Exciting, but also scary. Who knows what may happen when we start playing god with the universe.” Hammer to Nail

“Accessible and engaging… Bolt is good at keeping the science at a level that is clear and concise. His subjects include a wide range of scientists and bioengineers working on the front line of what might be possible, and fully aware of the concerns they must address. The strongest element in Human Nature is Bolt's ability to match abstract theory with what it could mean for individual humans. This is especially compelling in the case of David Sanchez, a child whose sickle-cell anemia could be eradicated with CRISPR-inspired treatments. This brave new world might seem frightening, yet when it comes to changing the life of someone you love, who could possibly say no?” The List

Doors open at 6:30pm. Tickets are available at the door or before the show at Cactus Records and Movie Lovers. Tickets are also available online at www.bozemandocseries.org, where you can also buy Season Passes and 7-film punch cards, learn more about the series, and view trailers for upcoming films. The series will continue every other Thursday through May 10th.
Get Tickets
Advertisement
Links:
http://www.bozemandocse.....rg/event/human-nature/
https://www.facebook.co.....vents/3267670766580693/